Modern painting began out of an urge to expose the unsettling nature of contemporary experience and fix it in paint. The modern painter set himself against the world and imagined that his individual revolt could bring the whole order crashing around his ears. Today, the same kind of individual engages in painting less out of an antagonistic impulse and more from a desire to rescue something out of the rubble. The former rejection of tradition has transformed into a reflection on what still gives certain acts meaning and value. It is the most simple of these acts, placing a mark on the canvas, that is thoroughly explored by Steven Foy in this series of paintings. 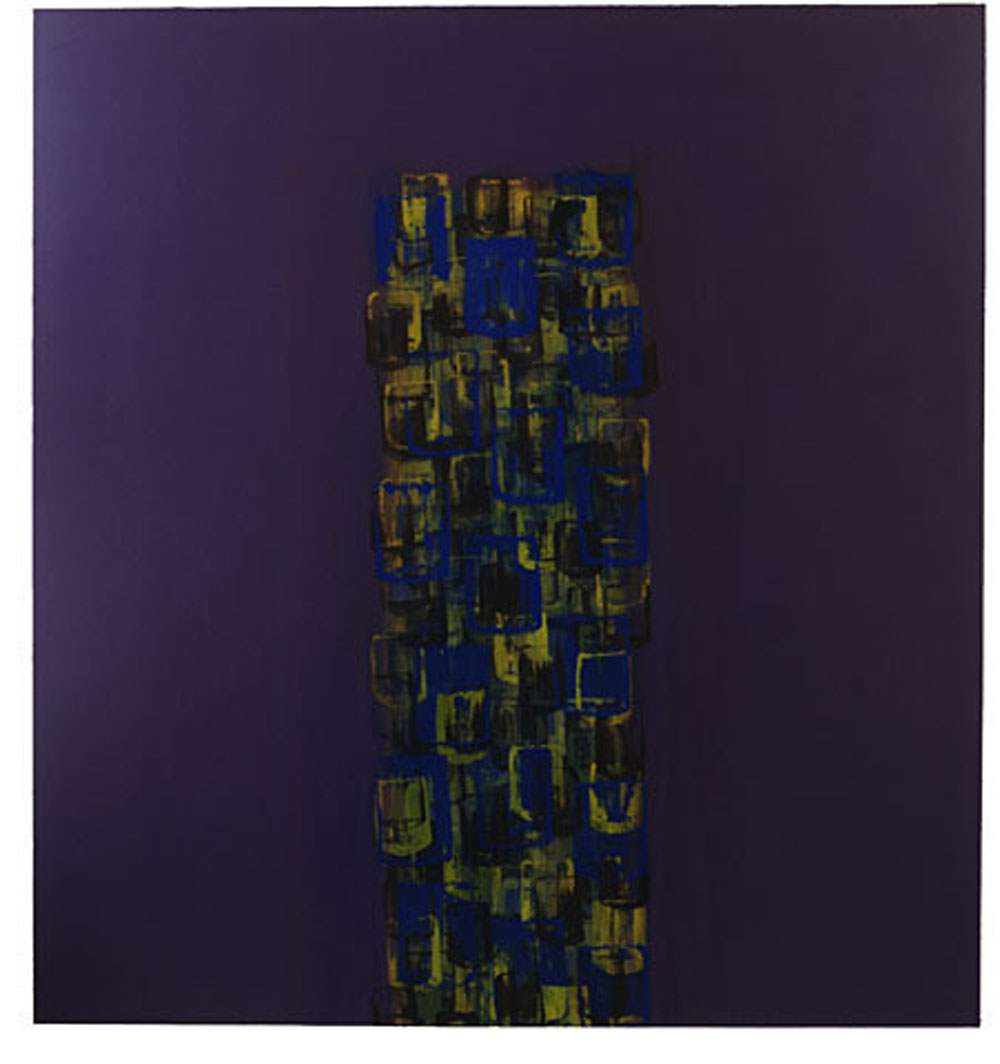 Fifty years ago the poet and critic Harold Rosenberg commented that the painter had ‘changed into a ghost inhabiting The Art World.’1 He used this phrase to criticise the cult of personality that had built up around abstract painting. In his eyes, the consuming public was more interested in the artist than the object. At the same time, his comment suggested that the painter had died. There was no longer any coherent idea in his age of what such a person should be or should do. Half a century on we can see what Rosenberg was getting at. Today many artists no longer feel the need to engage with painting in any way. Instead, these practitioners exist in self defining state where everything they do is artistic. They are content to haunt the institutions of the art world, as Rosenberg puts it, hanging around the museum like a bad smell. Foy explores the problem from an altogether different angle, plunging back into the very medium which caused this crisis of confidence in the artist’s identity. Not only is he a ghost in his paintings but they are also spectral reminders of the potential of painting to be an expressive medium.

Perhaps the most striking feature of the Isolation paintings, given my comments concerning expression, is the manner in which Foy he has gone about removing himself from the work, scraping and wiping off his brushstrokes almost as soon as they are applied. This leaves behind something hollow where we expect fullness. Scraping off has always been an important part of the activity of painting but in the Isolation series it is less about correction than something like self censorship. Freud coined the term ‘secondary revision’ for the process of recounting a dream. By this he meant that a dream is already a cloaking of an original wish and our retelling of it puts it through a further stage of concealment. Foy’s erasure of his marks put us one step further again from the first impulse which gave rise to them. However, as we look closer, these phantom strokes generate new textures and shapes that were previously hidden. If a brushstroke is the mark of authority and authorship, Foy demonstrates that it conceals chance beauty in a way that recalls Max Ernst’s practice of grattage. In Isolation no.58 the sequence of applications and abrasions reaches a level of complexity that creates a flickering sense of presence within the central column of strokes. It is impossible to reconstruct the sequence of layering and removal but in the pattern of traces that remain we can read all we need to know about the nervous disposition of abstract painting today.

In the early stages of the Isolation series, chance effects were produced in a different way. Foy held brushes in both hands and brought them over the canvas in a criss-cross fashion. One hand interfered with the other as they competed to apply themselves. The splashes at their intersection are records of a body and a mind wrestling each other. These random events were then reflected upon, set within boundaries and only remained visible at the centre of the painting, as for example in Isolation no.26. Looking through the Isolation series, it is possible to see in the sequence how the experiment with the handedness of the artist became subtly translated into the later questioning of the artist’s hand. I have described the ghostly shapes of the Isolation works as strokes but the removal of paint makes them appear to be produced quite differently. In fact, they look almost printed. They look stamped on the canvas although they are pulled across it. The brush does not seem to sweep but to dab with an urgency like a pointing finger. And like fingerprints, this multitude of signatures records the presence of someone in his absence. The painter has long since left the scene.

The relationship to bodily experience represented by the clash of hands in the early Isolation paintings is also manifested in the image of the column which runs throughout the Isolation paintings. At its most obvious, this column stands as like a lone figure either set against an intangible landscape or sometimes captured by an inner sharp border. Such a literal figurative reference is overwhelmed by deeper empathetic relationships though. The column is not a representation of the artist alone but a test of our own abilities to identify with something beyond ourselves. The vertical form appears human not least because it is this orientation which separates us from the animal world. To look at Foy’s paintings is unsettling because of our desire to fix our own verticality against that of the painting. Just as his left hand fought his right, we too are caught in an odd showdown with the column which refuses to sit straight in our field of vision. It shifts from side to side or leans almost imperceptibly. This was a feature of human perception ruthlessly exploited by Barnett Newman whose paintings similarly evoked presence while maintaining an irreducible material nature. The key difference between Foy’s column and the Newman ‘zip’ is the weight which pushes down on top of it. In my use of the term column I have already created this allusion. None of these forms support anything directly but they are engaged in a struggle with gravity which adds to their feeling of physicality. 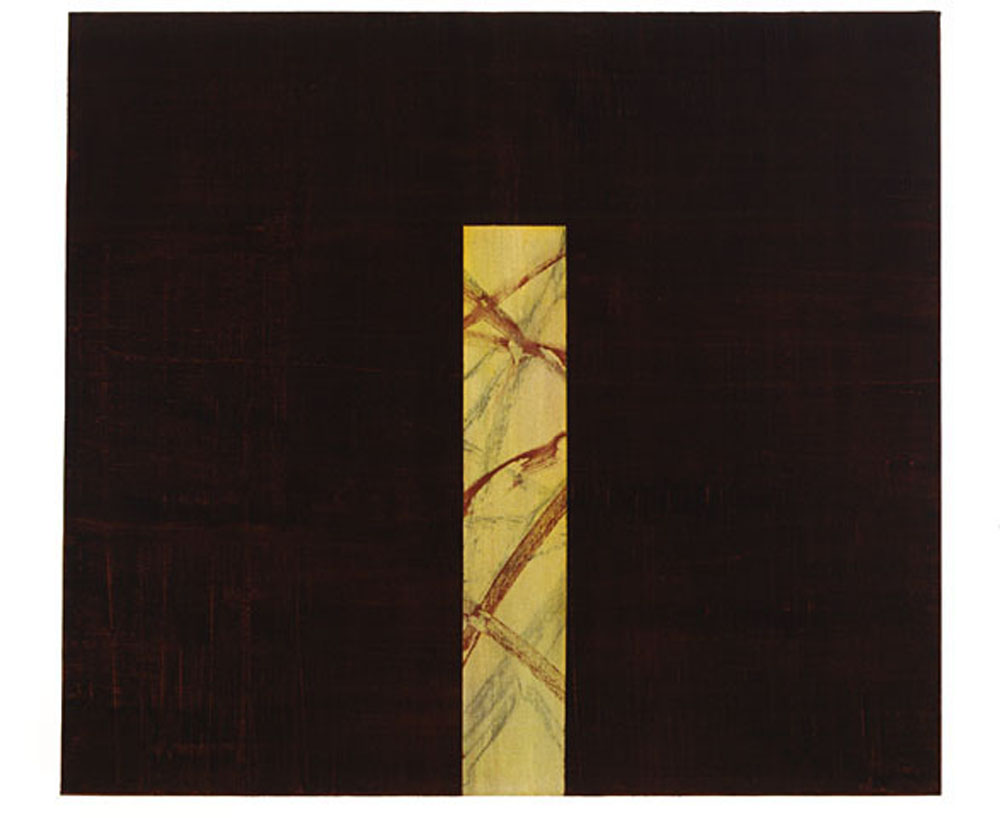 The body evoked in the Isolation paintings is not that of a ‘Vir Heroicus Sublimis’.2 It is altogether more vulnerable than Newman’s ‘zips’. Foy often combines hard boundaries and sharply differentiated colours with pigments bleeding into each other. What seems to be a firm edge produced with masking tape is often actually quite unstable. Similarly the stacked up brushstrokes in the centre are prone to bulge and blur. Both of these effects are brought to the fore in Isolation no.55. The intense yellow outer border and the deep purple interior create a level of contrast which is almost painful to look at. Yet this boundary is constantly permeated by minor accident. The column fades into its deep toned surroundings but resolutely refuses to be lost. The eye is constantly forced to readjust to encompass both the hard and soft edge and as it does so the viewer is taken through stages of resistance and compliance, materiality and its transcendence.

The bodily relation we have with these paintings changes in peculiar ways as their proportions alter. It is not the case that the largest works provide us with delusions of grandeur. In fact, the sensation evoked is more that of looking at something through a microscope, such as cells or microorganisms. On the other hand, the smallest paintings can conjure up feelings of vastness way beyond their scope. In each case the effect is reliant on our ability to project ourselves into the painting. What we identify with in each case is the fragmentary structure of our physical selves or our separation from the rest of the world. Foy has managed to get a sense of both aspects of isolation. On the one hand we imagine ourselves as individual, that is to say complete, separate units. On the other, the desire to individuate has broken us down in cells, atoms, genes. We have all become strangely connected in our separation. Foy may well feel isolated but he is not an isolationist. These paintings do not want to bury the painter but to allow him once more to make contact with others.

2. This was the title of Barnett Newman’s major painting of 1950 which translates as ‘Man, Heroic and Sublime’